Home > Parenting in the Sweet Spot by Topic > Brain Development > Growth Spurts in the Brain, or: Why Can’t My Kid Rent That Car?

It was hard to imagine, when my sons were all single-digit ages, that the time would ever come when they were all grown up and on their own. But the years do go by, and now my sons are all young adults, busy with establishing themselves in career and home. And pretty soon, all of them will be old enough for that ultimate achievement of adulthood: they will turn 25 and be old enough to rent a car at the airport.

Hey, wait … what’s so significant about turning 25?! Aren’t they adults at 18, or at least at 21? Not according to car rental company actuaries, who have studied driving behavior closely and have determined that it’s too risky to rent any sooner than age 25.

In case you’ve ever wondered how the actuaries arrived at this conclusion, here’s the answer. It has to do with the still-maturing human brain, particularly in the area of the prefrontal cortex that governs risk-taking and impulse control. It is not until the mid-twenties that this “CEO of the brain” settles down into mature assessments of possibilities and consequences. Until age 25, car rental companies aren’t going to take a chance on letting a risk-taking kid with unrestrained emotions take the wheel of one of their cars!

To understand this maturing process in the brain, let’s back up a bit on the growth timeline. The brain’s first big growth spurt happens before we are born. At birth, the brain already has most of the neurons it will ever have. Maturing in the young brain until about age 12 then involves growing more connections between the neurons, and strengthening these pathways. There is also ongoing “pruning” of unused and unneeded brain cells and connections to make the brain more efficient.

It’s this pruning and strengthening that are evidenced as a child gains new skills and understands new concepts, arriving at the end of elementary school as a pretty well put-together individual. 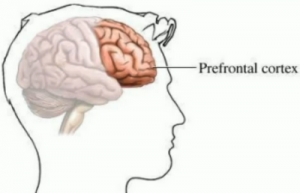 Then just before puberty, there is a second major growth spurt in the brain that adds a profusion of new connections in the prefrontal cortex (peaking at around age 11 in girls, age 13 in boys). This leads to the awkwardness, moodiness and lack of logic that mark the arrival of the teen years, and sets up the next long round of pruning and strengthening that lasts until … about age 25. Just in time to rent a car.

The prefrontal cortex as the brain’s CEO is the center of abstract thinking, regulating emotions, complex social interactions, delayed gratification … in other words, the center of growing up into maturity and independence. Staying safe and sane while exploring and learning and taking reasonable risks is the challenge of this phase in life.

The task of parenting, then, is to guide the child into learning how to not need the parent anymore. We work ourselves out of a job. But when we’ve parented well, and the young ones in our care can establish their own households, and rent their own cars, it’s a beautiful thing.

What’s on your mind?